ISS is a great example on a long and strong customer relation where Hurra Film’s knowledge about the company’s goals, targets, tone-of-voice and way of doing things has deepened over time making it easier to build on existing material or to create new answers to well known challenges.

The last 9 years Hurra Film has made several hundred movies for ISS World and ISS Denmark. Hurra Film has been a permanent supplier of program movies, tribute films and other content at the annual global Team Management Conference but has also produced support material or change management support for leaders, global training videos for employees, HR support and strategy roll out movies:

Programme movies:
The animated programme movie is another recurring visual landmark created by Hurra Film at the annual ISS Team Management Conference. Every year showing the conference programme and presenting the host city in a new style and with an underlying story inspired by the city or by one of its (in)famous fellow-townsmen.

Tribute movies:
Every year ISS makes a film to honor their 500.000 employees working in 50 countries around the world. Hurra Film has been supplier of this very special task for about ten years. Each movie has a specific theme and is shown at the annual ISS Team Management Conference and immediately after pushed out on social media to all employees. 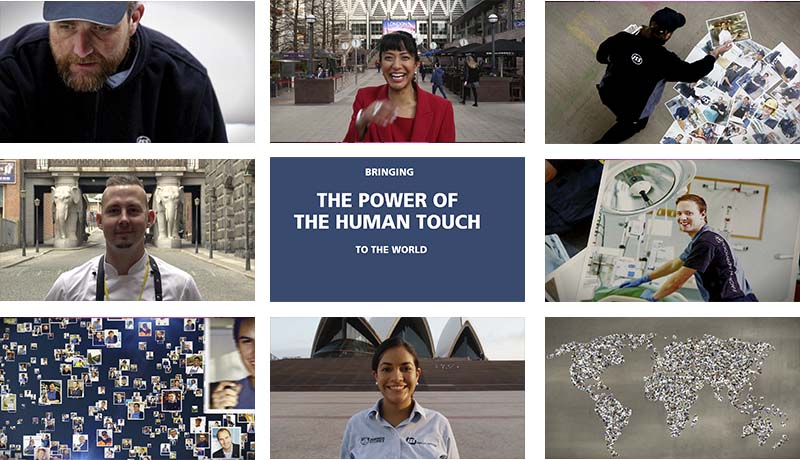 Stop motion:
Game manual made as a short stop-motion movie. The game “Explore” was made for the TMC leaders’ conference and the purpose was to get to know more about the company’s values and your colleagues in a fun way. A short fun introduction like this takes away uncertainty and wasted time for the leaders/employees playing.

Nordea:
Movie showcasing the concept of ‘touch points’ between customers and ISS employees at a Nordea site. Through a conversation between the account executives from both sides it shows that the behaviour, the level of proactivity and engagement from the ISS employees makes the difference for the customer. Furthermore it demonstrates that the concept of touchpoints itself mixed with empowerment creates ISS employee satisfaction.

SKAT:
Personal movie telling the story about a ISS cantina leader at the Danish Tax Department. Her views on social responsibility and best practice results in great atmosphere and development of the people working there. The project manager from the customer side is very satisfied with the whole cantina experience and highlights that the collaboration spirit and the communication lines are very strong. The employees are happy because they feel acknowledged and empowered.